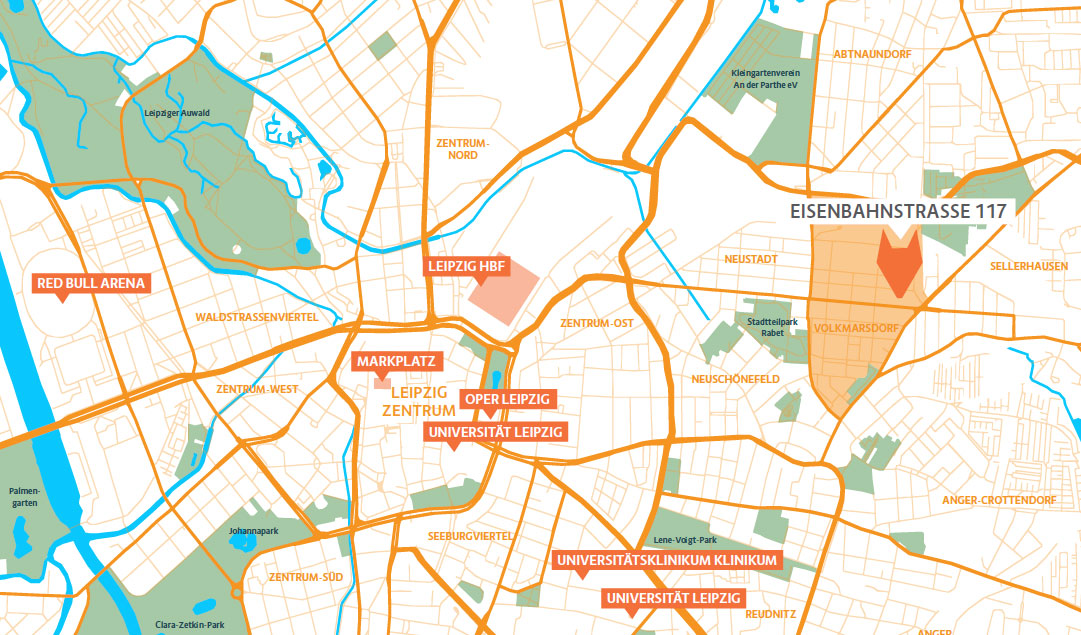 A colourful and international neighbourhood

Out the door and into the colorful life. Built as a workers’ residential area in the late 19th century, Volkmarsdorf consists mostly of renovated apartment buildings from the Wilhelminian period. Along Eisenbahnstraße there are international shops, cafés and small shops. Life here is a colourful mixture of original Leipzigers, students, artists and stranded people. Also known as “Little Istanbul”, the streets are bustling with life. In between there is a basketball court in the district park Rabet and lots of space for outdoor sports. Residents particularly appreciate the fast public transport connection to Leipzig’s main station and the city centre. Bus lines and trams stop at nearby Torgauer Platz. And around the corner – on Konradstraße – there is the 16th secondary school.

Smart living in the neighbourhood of tomorrow

In October 2019 it was announced in Leipzig City Hall that the 600,000 inhabitant threshold has now been reached again. The real estate market is also shining in a bright light. A good indicator for the future of the city is the approximately 40,000 students, because while ten years ago 80 percent of them planned to leave Leipzig again after their studies, today 80 percent could imagine staying here. Large companies such as BMW, DHL, Porsche and Amazon contribute to this, because they have turned Leipzig into an important production and logistics centre. Around 90 percent of the buildings in the centre of Leipzig have been restored. What could be bought for little money just a few years ago can now only be bought with a lot of luck. An undiscovered gem is located east of Leipzig’s central station – in the Volkmarsdorf district. It is a wild mixture of old buildings, small late buildings and gaps between buildings. Also graffiti decorate the walls of the houses. Here Leipzig is rough and shows its rough side. Nevertheless, the location has a lot to offer, because it is only seven minutes by bike to the main station. The good public transport connection to the university also speaks for the location.

Please fill in the contact fields,
so that we can send you the documents about the property.